Seven Chakra Bracelet is very popular among healing stone bracelets thanks to it’s powerful healing properties. In addition, their natural beauty and color is a gift in itself. And chakra bracelets are easy to make and inexpensive.

What Are Seven Chakras

Innocence and wisdom are the most fundamental ability of a person to distinguish right from wrong. In modern times, education often has nothing to do with wisdom to some extent. Those high educated often do stupid things. On the contrary, those rural residents who less educated, have a fundamental wisdom and live a simple and balanced life. People who have opened the wheel of innocence are as innocent as a child. They still maintain the innocence and curiosity of a child. They live in this society, but they are not completely constrained by this society.

The root chakra is also translated as the chakra of innocence, and the Sanskrit word is Mooladahra, which means root and support. The color of this chakra is coral red with four petals, and the character of this chakra is innocence and wisdom. This chakra is the root of the entire energy system. Physically, this chakra corresponds to the Pelvic Plexus, which takes care of our excretory system and reproductive organs.

Sacral chakra is orange in color and has six petals. Physically Sacral Chakra corresponds to the Aortic Plexus, which governs our spleen, pancreas and the lower part of the liver. The character of this chakra is true knowledge (the reality of the world) and attention. Those who have opened this chakra will gain true knowledge and creativity.

Solar Plexus Chakra is yellow in color and has ten petals. The navel chakra is the physical counterpart to the Solar Plexus, which governs our stomach and intestines.

The character of this chakra is pursuit, and it also governs satisfaction. Since the beginning of evolution, the first thing of life is to pursue food and water. In order to continue, the higher the animal, the more and more thing they need. Most of modern people, those have a stable life without worring food, will pursue a lot of wealth. With wealth comes, they will pursuit of fame, status and power. Like a bottomless abyss, desire can never be satisfied. If a person is sensitive, he/she should know from their own experience, all these material things could not really satisfy our life, and he / she want something of eternal value. Then he / she will become a seeker of truth. Seekers of this truth are everywhere in the world, and there are more and more.

Another characteristic of the Solar Plexus Chakra is balance. The so-called balance is to live a life that is neutral and peaceful. If a person’s Solar Plexus chakra is enlightened, they will be taken care of in life, they will not worry about food and clothing, and they will be satisfied in material life. This is because that they get “yoga”, which is an unsolicited result.

Heart Chakra is in the middle of our chest, it is green in color and has 12 petals. The Heart Chakra corresponds to the Cardiac Plexus and takes care of our heart and respiratory system. The character of the heart chakra is love. A person whose heart chakra is opened will naturally give birth to a kind of benevolent love for things and people. This is an unconditional love, and it is not done for some utilitarian purpose. They can go beyond the selfishness of their own body to care for and help those around them.

Throat Chakra is located at the throat. It is blue in color and has16 petals. It takes care of our cervical plexus (Cervical Plexus) and thyroid.

Throat Chakra is the hub of nerves, and the nerve lines on the palm pass through here before connecting to the brain. So it has something to do with the sensing ability of our palm. In additino, smoking can block the throat chakra.

People with a good throat chakra have good communication skills and know how to solve problems for others. Since they understand that they are a part of the whole, they are very gregarious and popular with the group. They lead people toward unity, toward fulfilling interpersonal relationships.

Located in the center of the brain, Third Eye Chakra is blue in color and has 2 petals. It takes care of our pineal and pituitary glands. This chakra is a very narrow passage. The left and right meridians intersect at the optic nerve chiasm. When this chakra is smooth and healthy, the Kundalini rises directly, the thoughts are still, and the space for alternate thoughts is extended. At this time, the attention can be attached to this moment of calm, so as to achieve a state of full awareness but no worries. Let people embrace great peace and comfort. If this state of carelessness can be maintained and continued, our new exploration of the universe will begin.

The cause of this chakra’s blockage is too much ego (ego / ego) and superego (super ego / conditioning), which is due to excessive physical activity and overthinking in the right channel, and excessive emotion in the left channel. The accumulation of transformation and thoughts causes the two channels to expand like balloons and squeeze toward the central channel. In this swollen state, the central channel is blocked, preventing the Kundalini from rising above the head.

To improve this, we should develop an attitude of forgiveness for others and ourselves. If we do not forgive others, we cannot pass through this narrow passage.

Crown Chakra controls a thousand nerve lines in the limbic area at the top of the brain, so the ancients represented it with a thousand-petal lotus. After realizing self-awareness, these nerve lines will be inspired and activated. Then we can gain power that we didn’t have before, and perceive things in the central nervous system that we couldn’t perceive before. This energy center surrounds the top of the head. This is where all the energy centers meet with the three veins. When the Kundalini rises above the top of the head, you get your “realization”.

This inductive force can sometimes feel a cool and harmonious wind from the energy centers in the body when the energy is transmitted. Sometimes this breeze seems warm, because your Kundalini is clearing the energy centers. The cosmic energy will constantly cleanse your spiritual body, and you will feel more clearly the life energy surrounding you.

You will become more open-minded and better able to accept the positive energy emanating from nature: trees, mountains, flowers, clouds and blue sky, you will also be able to feel and understand the situation of others, and know when and how to help them. In this way you begin to live a spiritual life.

How To Make Seven Chakras Bracelet?

If you don’t have time to make handmaded bracelet, DearBeads provide several chakra bracelet for you. Shop Chakra Cracelet.

How to Make Jewelry — Beginners

What Bead Sizes Are Suitable for My DIY Jewelry Making？ 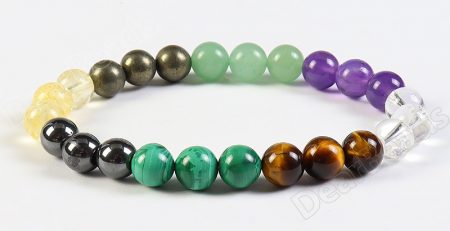 Bead Store Near Me

NOTICE: DearBeads will be closed from 1st Oct. to 6th Oct. for Chinese National Day. Orders after 27th Sept. will be proceed after holiday according to order time in priority. Thank you so much for your understanding and supports! Dismiss