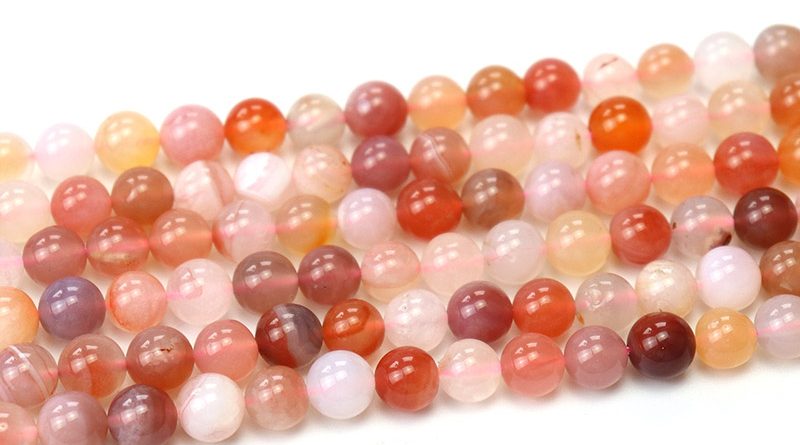 Agate is a kind of chalcedony, consisting of chalcedony and quartz. The texture of agate is delicate and beautiful, and there are various bright and beautiful colors. Agate can be divided into many types according to its color, stripe, inclusion and optical characteristics, for example, crazy lace agate, banded agate, moss agate, botswana agate and so on. Different growth environments result in different shapes and colors of agate. Agate has a variety of colors and patterns, and the price is moderate, making agate one of the most popular gemstone.

The famous origins of agate in the world are: China, India, Brazil, Madagascar, the United States, Egypt, Australia, Mexico.

It is said that agate can nourish the skin, make the skin delicate after wearing. People believe that agate can regulate emotions, absorb the negative energy, relieve stress and please the body and mind. Shop Agate Beads

6. Gray agate: Gray agate beads is natural color. Some color layers of gray agate are like tree trunk rings, the beauty itself is a gift from natural; some like a splash ink landscape painting. Shop Gray Agate Beads

Crystal therapy believes that it corresponds to the throat chakra, which can help people experience higher levels of energy, express thoughts and feelings more freely, eliminate anger, inhibit infection, inflammation. Psychologically, blue lace agate is said to relieve depression caused by fear of criticism or rejection. This kind of depression is common in parent-child relationships. Once the patient is ashamed of self-expression and inhibits self-emotion, it will cause the throat chakra to be blocked, and the heart will feel suffocated from time to time. People believe blue lace agate can make people free from the constraints of life, become more sensitive and meticulous, and at the same time begin to dare to try new expressions. Shop Blue Lace Agate Beads

Crazy lace agate is full of silk-wrapped patterns, as delicate as lace, and has a low-key, unique pattern. Crazy lace agate has a deep and soft energy with its calm color, and is said to relieve its owner’s stress and tension and prepare a “stable state of mind”. Crazy lace agate can be many colors, it’s easy to find yellow, white, red, brown crazy lace agate in the market. Shop Crazy Lace Agate Beads

Druzy agate is a clustered aggregate of many single crystals growing in cracks or cavities in rock. Druzy agate is the main source of many gem minerals. In addition, many druzy agate has also been selected as ornament stones. Druzy agate is very popular thanks to it’s gorgeous glittering effect of tiny crystals and powerful healing properties. They are favourites in jewelry boutiques. Shop Druzy Agate

Sakura agate also known as cherry blossom agate, Sakura agate is mainly found in Madagascar and Brazil. It has become more and more popular thanks to its pink-white and “cherry blossom-like” characteristic inclusions. The special white petal-shaped inclusions and light pink matrix are integrated with each other, which has a strong ornamental and collection value. In recent years, the price has been rising all the way. Sakura agate inclusions can be light pink, pale pink, pink-orange, reddish-brown, white, light gray-purple, and even green. Green cherry blossom agate is relatively rare, and the price is higher than other colors. These beautiful inclusions are composed of clustered inclusions in different directions and planes, showing a vague and hazy feeling.

Sakura agate is especially suitable for women, it is said that it can regulate female hormones, reconcile qi and blood, and is effective for women with hormonal disorders during menopause. At the same time, it can also relax and relieve the pressure, at the same time, it can also reduce the symptoms of insomnia and dreaming, and effectively improve the quality of sleep. Shop Sakura Agate Beads

The natural texture of moss agate looks like moss floating in the river, graceful and winding. Moss agate has red, green, purple, yellow, brown color and so on. MOHS 7.0-7.5. Mainly found in China, Africa, India. Each moss agate stones are unique, not 2 pieces are the same. This makes it a very popular stone. Not only that, but also because of the powerful healing properties.

The energy of moss agate is closely related to nature. It is said that it can regenerate the soul, help to discover its own beauty; it can reduce the damage caused by climate and environmental pollution, especially for those who are engaged in architecture and gardening industries.

Spiritually, it’s said that moss agate can improve self-expression and communication skills, and balance emotions. It encourages honesty, hope and optimism. For those often suffer from depression due to the influence of their living environment, moss agate can always help them properly understand the reasons behind it.

In terms of psychology, moss agate can make people more self-love and stimulate the positive side of the character; it can also eliminate fear and relieve deep-rooted pressure; it can also help to build relationships and expand personal space. Shop Moss Agate Beads

Fire agate is characterized by its deep, iridescent hues and fiery, swirling patterns. It is believed to have powerful metaphysical properties and is often used in crystal healing and meditation practices. Fire agate is typically found in volcanic regions and is prized for its unique, fiery appearance and energy. Fire agate in the market is usually heated and dyed agate. Shop Fire Agate Beads 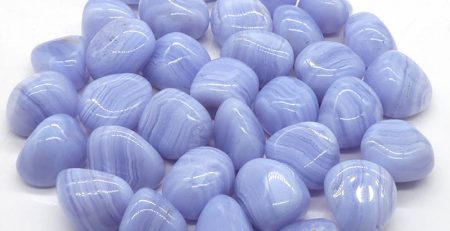